A lot has changed since I first wrote this post - as of today I’d recommend you use VSCode Remote Containers Extension instead of this. PyCharm has similar functionality as well.

What I normally do now - start up a remote container on a development server running JupyerLab (still using Conda for the Python environment), and attach to it. These docs may be useful is you want to do that. I can then port-forward 8888 if I want to use Juypter, or just directly develop within VSCode within the remote container.

I was excited to learn recently that you can run VSCode within Docker containers, due to the great work from the Coder team. Up until now I’ve been running JupyterLab within containers, which - while allowing for quick prototyping, was less than ideal as a full featured IDE. I’ve updated the Dockerfile’s I often use - which now include:

Here’s how I set it up - as before my focus was on setting up a data science environment where I could quickly iterate within the container itself.

You can find a fully working example here:

Why is this useful?

First - the Dockerfile. Here we’re setting up our Conda environment, downloading the VScode binary, adding in a code folder and a docker-entrypoint.sh script. If you’ve never encountered an entrypoint script before - it essentially is telling Docker that this specific piece of code must always execute when the container starts.

This is our docker-entrypoint.sh script. In summary: if no extra parameters are passed then we start JupyterLab and VSCode, if a parameter is passed than execute that instead. This allows us to do things like develop locally, and when we have a Python script ready just pass in python our_script.py without changing anything else.

After we build the image (docker build -t example-ds-project .) we can run it. The following command runs our container, opening up ports 8443 and 8888, and mounts local directories code and data onto the container as well.

We can then navigate to http://localhost:8443 and we have a fully featured, working version of VSCode: 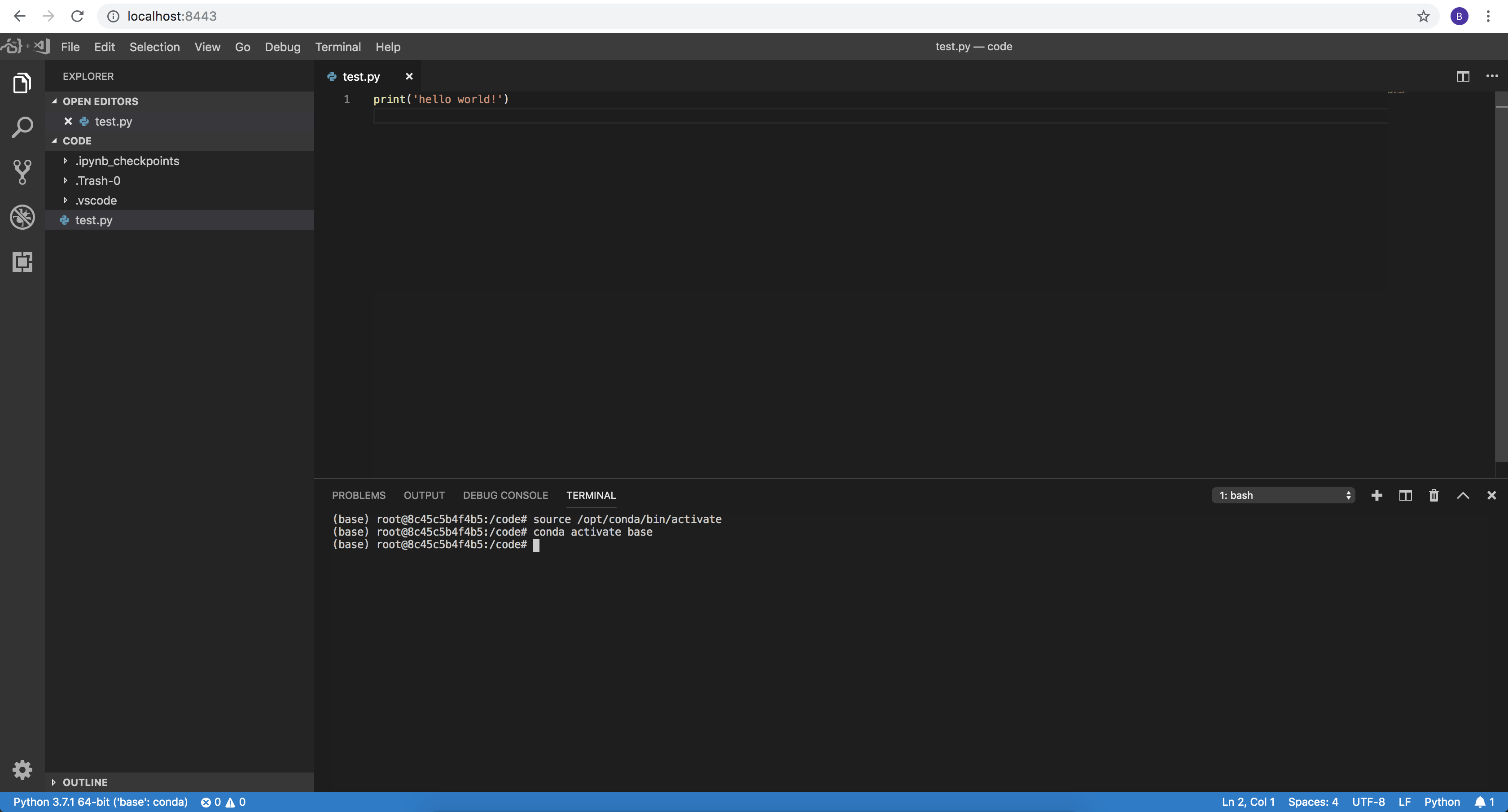 You can even do things like installing extensions. For example you could install Microsoft’s Python extension to enable things like autocomplete and formatting, and so on. All your extensions and VSCode configuration will persist in the local ./data directory, so when you start up the container again you won’t have to set everything up again.

As a plus we still have JupyterLab running on http://localhost:8888, which allows us still prototype quickly via notebooks, while being able to quickly switch over to VSCode when we’re ready to clean up and productionalize our code.